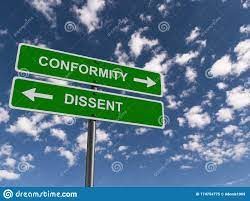 There is a trend that is manifesting itself in our democracy. The intolerance of dissenting voices. I watched with alarm the January 6th, 2020, attack on our democracy. But what we are also seeing is the claim that any dissent of opinions and ideas is considered a part of that effort. This is dismissive of genuine opinions building up in our country. The main streaming of ideas that those who dissent too loudly must be anti democracy. I watched as decades past those who were anti war were called Un-American. Now those who oppose establishment policies are considered Anti Democracy. This is a sure way and path to authoritarian tendencies.

The rights of citizens in our democracy are clear. The first amendment protects speech. The universal approach to speak one’s belief without ostracization by the gatekeepers of our democracy. Our government, our legislatures and media. To have that right one has to accept the existence of equal and opposing thought. That is democracy in a nutshell. The competition of ideas is what makes a democracy and a republic.

In our democracy we are seeing violence quickly replace thought. Witness Portland on any given week. Where the so-called Antifascist duels with the so-called Fascist. Each claims to represent our collective values. The Antifa and Proud Boys of our country in America. Look into any democracy today such outfits exist. These are extreme polarizations of our discourse in democracy. Extreme in the sense that they use violence to supplement their ideas. It is one of force against reason and rationality. These forces must be opposed by all for our collective democracy to continue to exist. Existing in civil discourse that dissent is patriotic but violence we shall oppose by all means.

After the January 6th attack on our citadel of democracy. The rationale being pushed is now that most conservative and republican opposition is part of that process. This is an overreach. A lazy approach not to confront conservative and republican ideals. We watched as the same was said of the tens of millions who opposed war in the Middle East and the Republican Establishment. Today the same is said of those who oppose the Democrat Party establishment. From reactions to teaching on White Guilt in schools, Covid Vaccinations Mandate increasing hostility to Christians beliefs and even Taxes.

Disclaimer: I got three vaccines for Covid because I believe in science. But that is my choice, a choice not given to all in America.

The realm of open competition of ideas is now seen as unpatriotic or even treason by one side or the other. We are also seeing with some on the side of the right quickly becoming refuseniks to what goes to the heart of our democracy. Simple facts like election results acceptance of winners and losers. Refusing to accept without bringing facts or proof beyond doubt.

Disclaimer: I am a partisan like everyone else. A proud Republican. But one who has a legislator who I love, my own brother in the Minnesota house, a proud Democrat. I have learned to accept that my ideas of governance will be opposed by those I love. It is about time America adopts this approach. Without animosity or hate but open competition for our ideas.

We cannot have peaceful dissent turned into national security criteria to which our government can target any one of us for having it.

Democracy to survive we need the insight of a previous president. President John F. Kennedy said,

That process of peaceful revolution is the bedrock of our democratic ideals. We all agree one can dissent against the establishment, but the how and what we do about it is important. Without peaceful revolutions led by dissent the actions of the Tea party during the revolution of American Independence would not be suppressed to lead to a violent revolution of American Independence. Slavery, Jim Crow, LGBTQi rights, all led to civil war, civil rights action movements and Stone Wall.

We urge all those who live in democracies to Dissent peacefully. It is your right, but do so non violently. Do so with civility. Do it with a smile and a laugh. And for all our sake the government, legislature and media should not ostracize or criminalize it. Let Freedom reign in our Democracy.